Hong Kong’s music and entertainment industry has seen a resurgence over the past few years thanks to a growing number of talent shows and competitions. These have added a number of talented artists and musicians to the scene, one of whom is Eagle Chan. On 29 September, KEF Music Gallery played host to his mini concert held for a small audience. 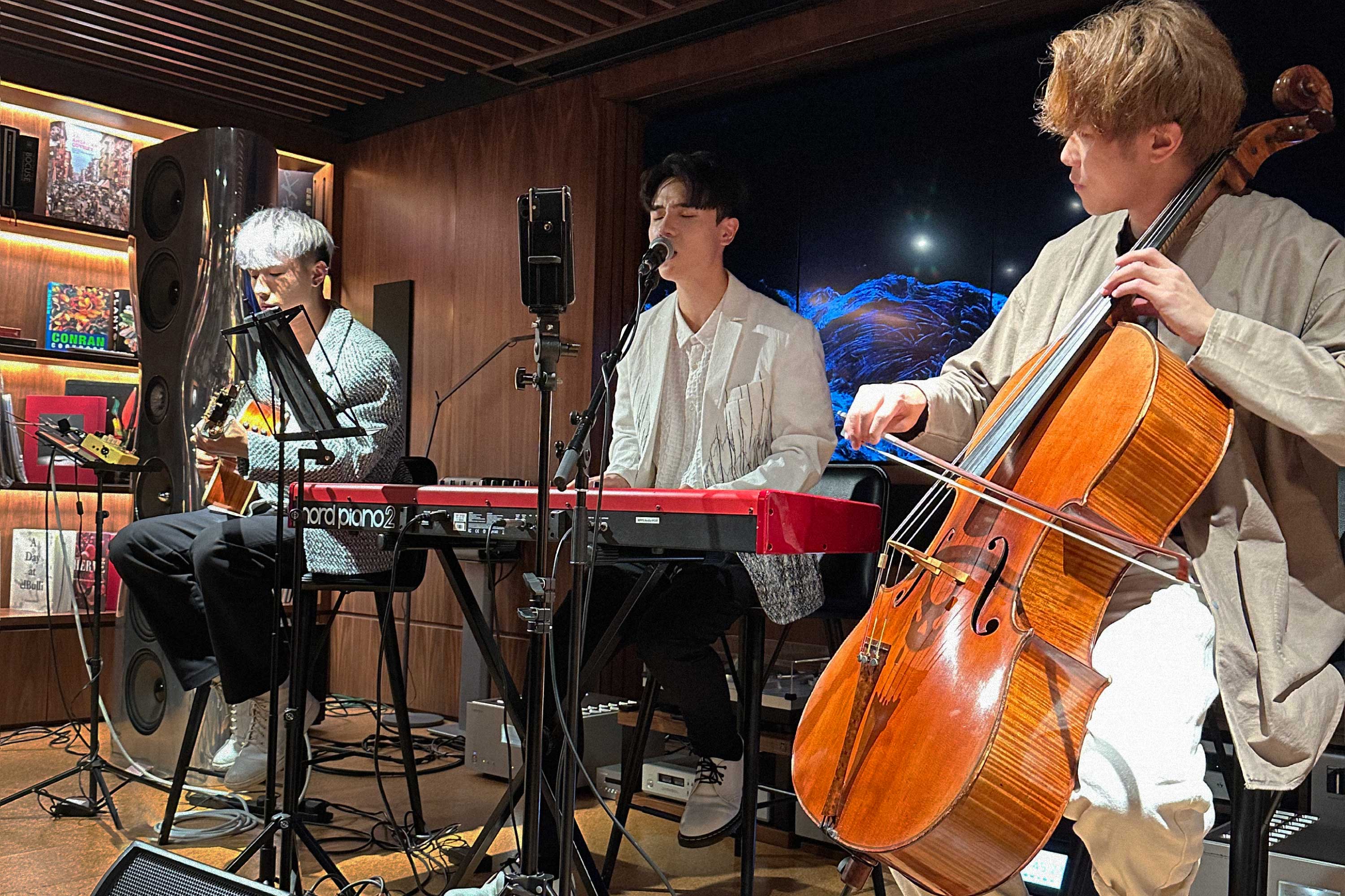 Following his stint on the second season of Viu TV’s Good Night Show, it’s no secret that Eagle has amassed a wealth of industry experience through writing and producing songs for established performers like MIRROR, Jeremy Lau and Alfred Hui. Once the show ended, Eagle made the decision to embark on his own journey as a solo singer and songwriter. 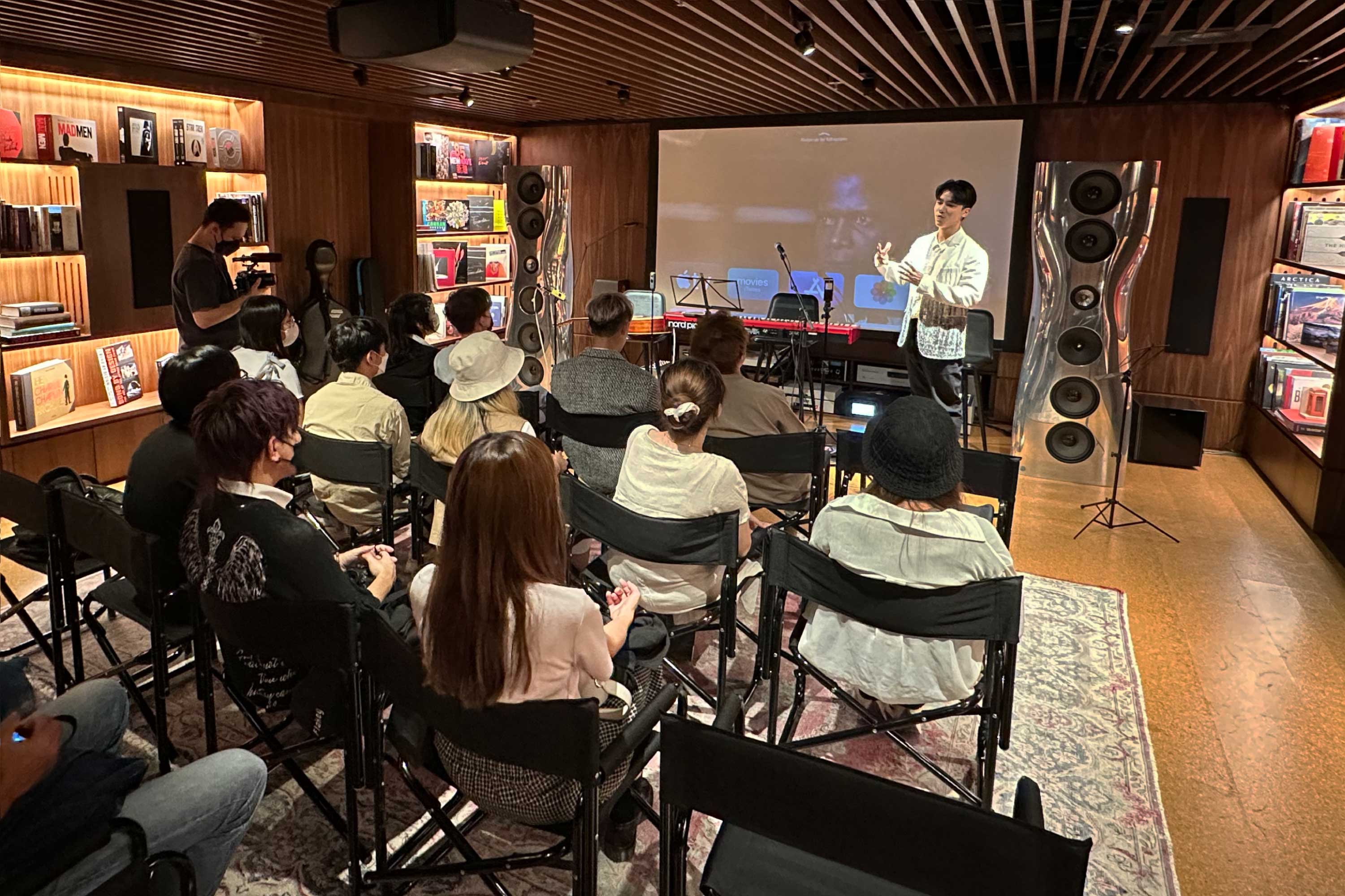 At his mini concert on 29 September, Eagle brought along two fellow musicians to back him up, and he also debuted his latest music video. The audience was made up of a small number of fans who had won tickets to the show. For those who could not be there in person, the show was streamed live on his Instagram page.

Before the concert began, we sat down with Eagle and chatted with him about his musical journey so far. 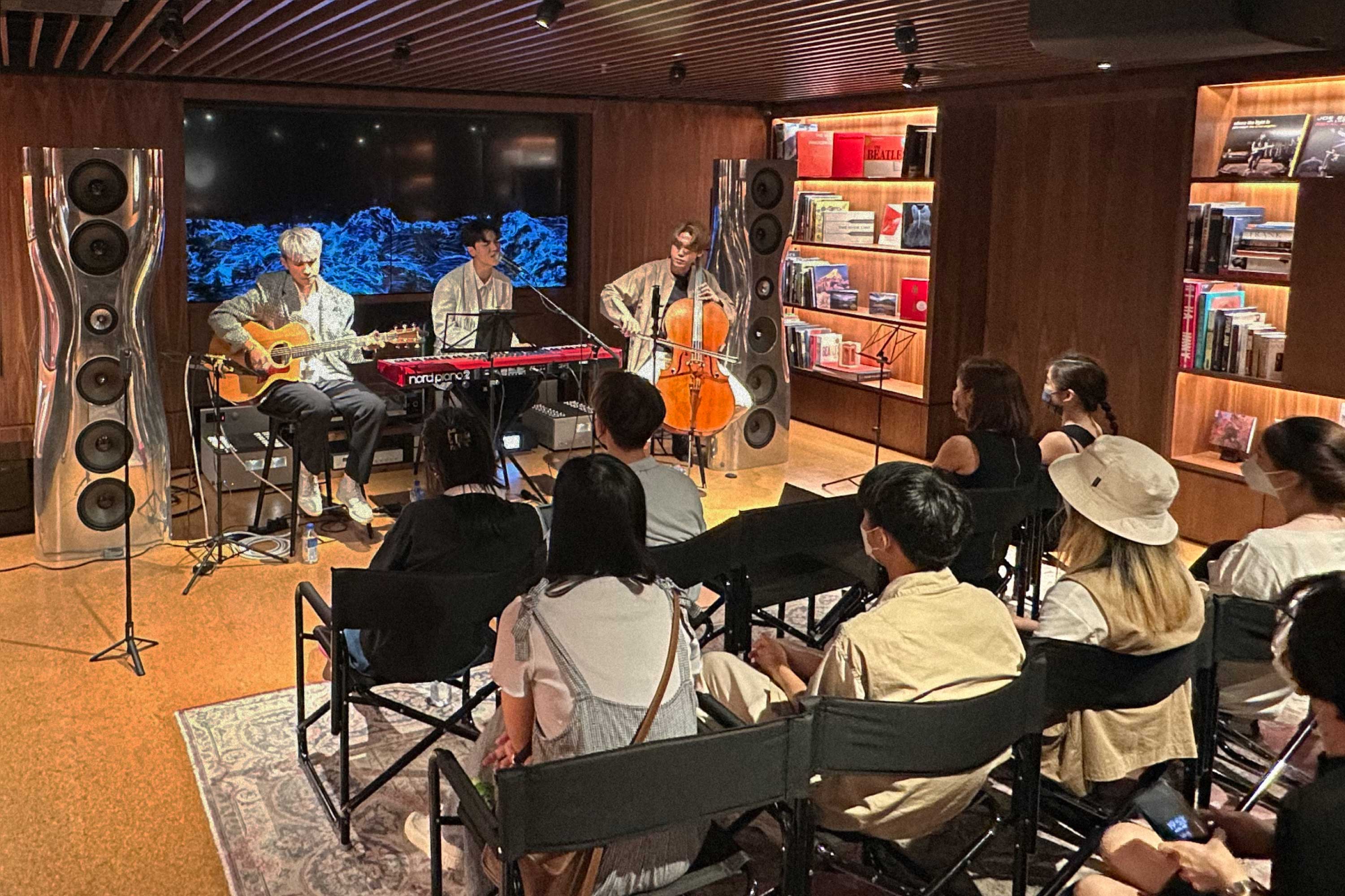 How and when did you start your music career?
"It all began when I started taking piano classes from an early age, and was learning about classical music. By the time I got to high school, I was also learning other instruments. At first, I didn’t find learning and practising piano to be a joyful experience for me, but one day, something clicked and I just began enjoying it more and more. During these years, I also started playing the violin, but I found the position to be a bit awkward for me, so I switched back to playing piano and guitar instead."

Where do you find inspiration for your music?
"Just like other creatives and performers, I find inspiration in everyday life and in the things that happen around me. My inspiration could come from a book I’ve read or a movie I’ve watched. I’m even starting to pay more attention to the little things happening around me. I’ll jot down what inspires me so I can refer to it again when I’m writing a song and see how I can incorporate it into the melody or lyrics."

What was your biggest takeaway from being a part of “Good Night Show” Season 2?
"It was a defining moment for me. It showed me the different facets of the music industry and allowed me to meet more like-minded musicians and creatives, and it showed me what it takes to become a musician in this day and age. Not only do you have to focus on your performance, you also need to take care of everything that goes on behind the scenes of the performance, and think about the story and the feeling you want to convey to the audience. What kind of influence do you want to have on your audience? This competition was the first step for me to take to learn what it’s like to become a musician in Hong Kong."

Which role do you enjoy most? Lyricist, songwriter, arranger or producer?
"I actually love them all, but if I really had to pick just one, it would be songwriter. It’s the one I’m most comfortable with, and it’s also the fastest, most direct way to convey your feelings to the audience compared to all the others."

What’s your favourite piece of work so far?
"I actually have two favourites: one I wrote for another artist, and the other one I wrote for myself. The first piece, Good Bye, is my latest release. I wrote, produced and sang it. The melody and lyrics are all very personal to me, and it really does convey my feelings during those moments. The second piece would be Negative, which I wrote for Alfred Hui two years ago. I remember when I wrote it and sent the demo to his record company, it started off as a tropical EDM track that sounded very positive and happy, and when it was passed to Alfred and Kiri T, they switched it up into a very cool sounding song. Of course, the song topping the charts at 903 Radio is another reason I loved it so much and why it remains a very important part of my career." 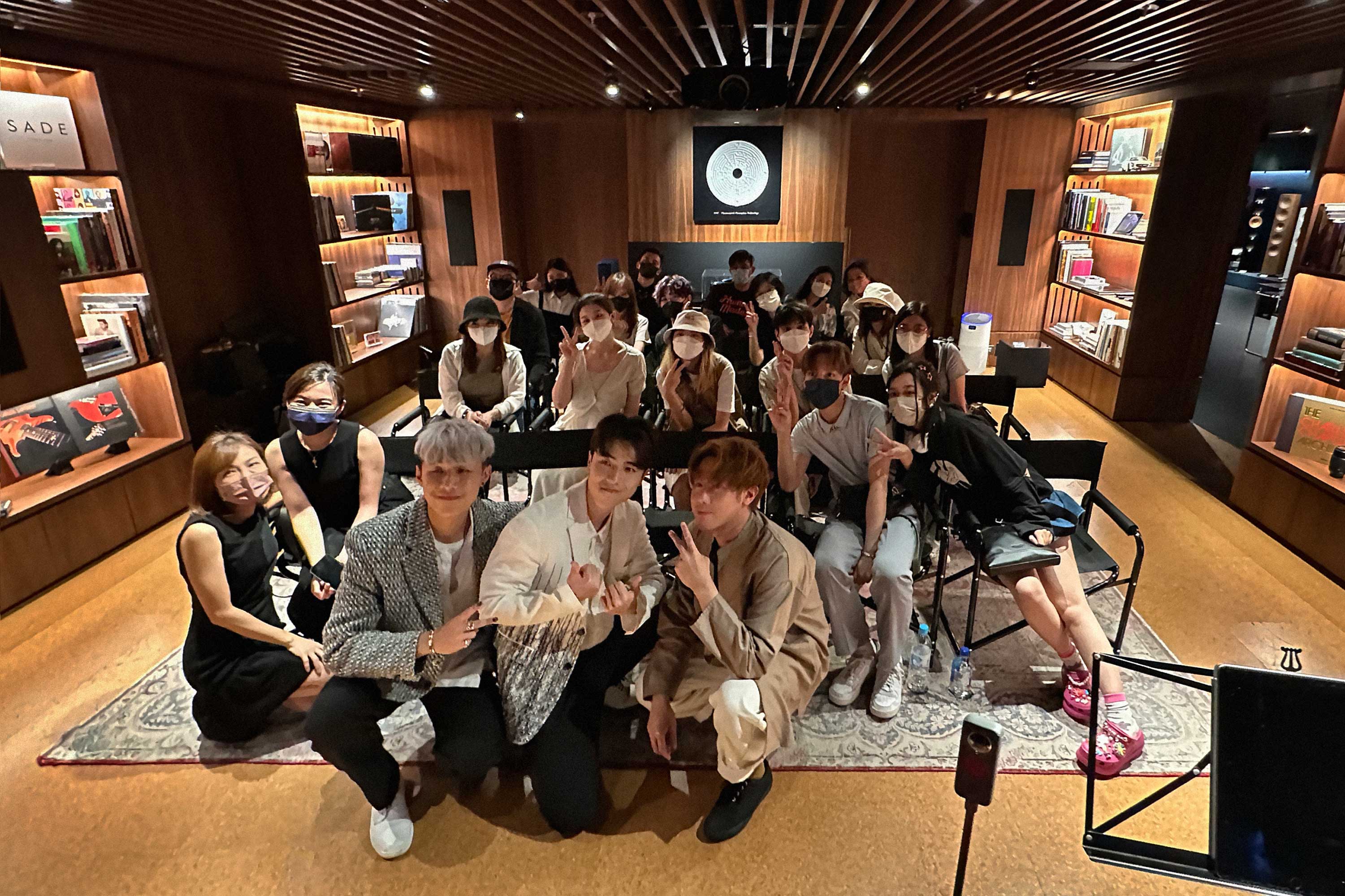 Have you had any unforgettable experiences so far in your career?
"It’s hard to single out just one experience, but maybe a recent breakthrough in how I write songs would be one. I’m used to being the kind of artist that sits behind a desk and churns out different tunes, but lately I’ve been feeling that his way feels quite robotic, so I’m trying a more organic method. If inspiration strikes when I’m out travelling, or when I’m out and about, I record the melody on my phone and then recreate it in the studio. This way, everything feels more personal, more organic, and truly conveys the feelings I had at that moment. So I’d say that changing the way that I write songs is definitely one of my most unforgettable experiences yet."

What is music to you?
"To me, music is a way to release my feelings to the world. Whether they’re happy feelings or not, it gives me the chance to convey and share the different feelings and thoughts I might have at different stages of my life. When someone listens to my music, they might share the same feelings I had during that moment, and this connection to my listeners is what I treasure most."

If you could choose to work with any musician, who would it be?
"I’d like to learn more, especially from established producers and singer-songwriters, so in that case, I’d pick Eric Chan, a music producer. He produces many different genres of music that touch the hearts of many people. He’s collaborated with singers like Khalil Fong. Another person I’d like to work with is Yvette Wong. She’s written songs for artists like Jay Fung, and she has her own distinctive writing style. And the final person I’d like to work with is Christopher Chak. I loved all of his songs and his writing style. Yes, even though his songs are very hard to sing! But I really love his music and I hope we get the chance to maybe write a song together one day."

Is there anything in music you’d still like to try?
"I think I’m done with the EDM phase of my career. It gave the audience a glimpse of what Eagle Chan is like working on EDM, but I think you need to be multifaceted in this industry and show different sides and possibilities of who you are as a musician. In future, I think I want to switch my focus back to music that incorporates the piano, or maybe music that’s closer to my personal style. Maybe songs and music that can soothe the soul and touch the hearts of people out there. It’s been a tough few years for everyone, and I’d like to create music that brings a sense of calmness."

What are your plans for the future? What can we look forward to from you?
"Of course, we have the upcoming concert with KEF that’s going to be a great experience for me playing alongside two of my great friends, Bernard and Will. I’ll also be doing some live performances with a few indie artists in November, so stay tuned for those. I think hosting live performances is the most direct way to engage with my fans and listeners, so I’m always looking forward to those opportunities and to on-stage performances."